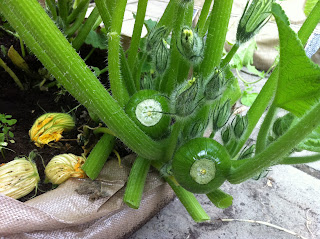 I'm growing a fabulous squash in my garden.  It's called Zapallito de Toscana and I got hold of the seeds from Garden Organic's Heritage Seed Library.

They were easy to germinate.  Well, easier than the courgette seeds. 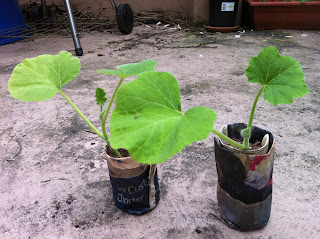 They were strong seedlings.  I could tell that they would be feisty growers!

I planted these two seedlings out into their final planters with a courgette plant. 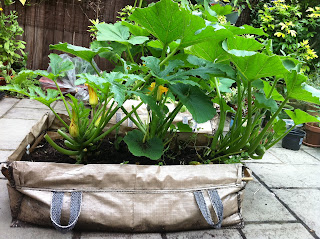 They are the perfect squash for a small garden as they grow in a bush style rather than the squash that like to crawl all over your garden.  They just need a decent depth of soil (like the planter in the picture).  They also would grow very well in potato planters.  Anything which allows them a good depth for their root run. 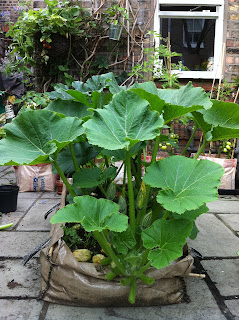 They are hungry feeders with a good appetite for water too.  Give them water whenever its not raining and feed them once a week with the richest feed you have (I feed mine with worm tea from my wormery) and in return they will reward you with many squashes. 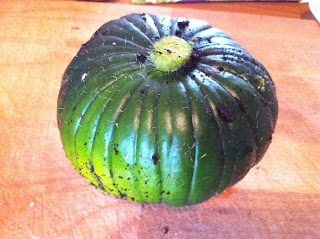 One of the major benefits of this squash is even if you have a glut, you don't need to eat them or cook them all up at once as you would courgettes.  As they grow bigger they form a hard skin which means they can be stored and eaten into Autumn.

Another benefit is, when harvested they will have grown their seeds to a large enough size to be able to save them.  Just be sure to pollinate the fruit yourself to ensure the seeds are actually a Zapallito de Toscana.  In order to do this, I check the flowers at breakfast time and have a look for any open female flowers.  Once I've found one I hunt for an open male flower from the same plant or exactly the same variety, in this case another Zapallito de Toscana.  I pick the male flower and remove all the petals.  I brush the stamen (the male sex part of the flower) over the stigma (the female sex part of the flower) and then leave the stamen inside the female flower.  I then use an elastic band to shut the female flower to ensure no pollinating insects can get into the flower.  Once the flower starts to die away I move the elastic band on to the base of the fruit so that I can identify a fruit that I have pollinated. 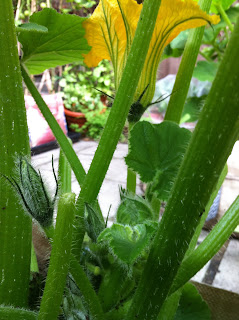 The benefit of pollinating a squash plant is that it will ensure that the seeds you save will produce the squash you want.  Squashes cross pollinate very easily and you will probably get a mix of all the squashes with open flowers on a given morning being grown in your street or allotment.  You can never be sure what you will get.  Although, the experimenter in me would like to grow one of these insect pollinated ones just to see what I would get!

So there you have it... Zapallito de Toscana...

1.  Great for a small patio garden due to its bush growing habit
2.  Grows fruits that can be eaten straight away or stored for later use
3.  Easy to save seed from (once pollinated by a gardener)