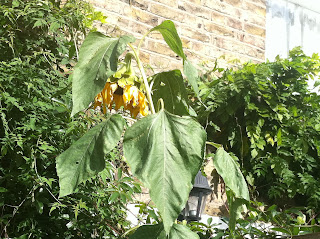 I haven't been blogging much of late.  Its not that I've stopped gardening... I've just not been gardening much in my own garden.  Maybe because I have a container garden and there's so much more to do in the community gardens I help maintain.

At the school garden we've been doing lots of weeding, harvesting beetroots, chard, beans and grapes.  Some of the pupils were even inspired to make juice out of the grapes!  We've also been planting green manures on the patches of ground that will remain vacant until next spring.  We chose Phacelia as it is not in any of the crop groups we are using in our crop rotation plans.

At the Community Garden we're planting a winter wheat section.  So far we've been turning the soil (with forks I might add as we didn't have a rotavator!)  As we have quite a large area to sow this has been very much fat burning work with towels to mop brows and water bottles on hand!  Next we will be raking the soil and then planting the seed.

At home, I do still have jobs to do... Planting the garlic!  This is a job my boyfriend sees as very high on my todo list as he would be devastated if there wasn't any fresh garlic to go with the fresh tomatoes next summer!!  I'm also going to plant some broad beans.  I've never grown them before but have an eye on a broad bean hummus recipe I'd love to try and I'm sure it just wouldn't be the same unless they are fresh from the garden and young beans.  I'm also thinking about moving the salad boxes into the plastic greenhouse when the final chillies have moved out.  I have some Hatif d'Annonay Peas http://www.realseeds.co.uk/peas.html which is a fast growing dwarf pea which can be sown now in October/November so that's another of my intentions.  I will have to bring my Zapallito de Toscana winter squash in soon but as we haven't had any frosts in South West London yet I'm letting it stay on the plant as long as I can.  The plant is still very much alive so have been letting it stay on the mother plant for as long as possible.  Please let me know if this is the right thing to do or would I be better just bringing them in now as this is the first year I have grown winter squash with a hard outer shell.

I've also been busy in the kitchen baking muffins with an oversized 600g patty pan, making nasturtium pesto, cooking roast squash and chilli, rosehip and apple jelly to name but a few concoctions.

I'm still trying to find something exciting to do with a bumper crop of beetroot from the school garden.  Any delicious beetroot ideas?
Posted by Unknown at 15:19