2011 Gardening Year of Trials and Tribulations 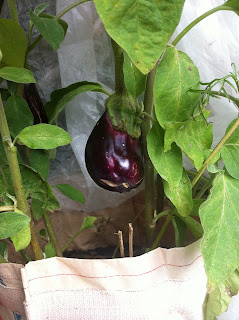 What a challenge 2011 has been for us gardeners but with challenges comes resourcefulness and problem solving.

If we look back over the past year we've had an extremely warm start in spring with April reaching over 20 degrees centigrade.  In May, temperatures dropped (but I find they do most years so waited until early June to plant out the cucurbitaceae (squash)).  Then the summer didn't really come.  July was grey and wet through some of the weeks.  Then August came and didn't really bring summer either ending, certainly in the South East with a day of severe rain that swiftly followed with blight attack on many tomatoes (the community gardens and school garden I support suffered this more than my small patio garden).  In September as there were so many green tomatoes being given to me I learned to make chutney for the first time.  Followed by a crazy Autumn and really high temperatures in the first week of October when lucky people who hadn't cropped yet got a week's summer.  And now we are experiencing a rather warm winter - in fact, I'm not sure whether to call it winter at all.  Usually the nasturtiums have died off by now but my sheltered patio garden hasn't really felt the bite of a frost yet.

So a rather challenging year to garden in but his meant lots of adaptation and resourcefulness. 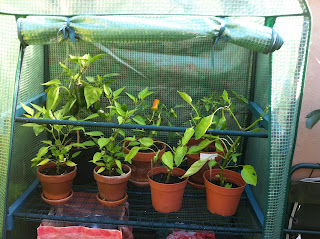 Early in the year my boyfriend bought me a plastic greenhouse.  It was absolutely fantastic for hardening off seedlings in early spring and I used it for this purpose from March all the way through to June.  For a few months I left it vacant, but I've really got into growing chillies this year and our summer wasn't really a good one for them so as the weather started to disappoint in July I started to move them into the plastic greenhouse - and they loved it!  I didn't even have to water them that much as they would sweat off the excess water and it would stay in the green house.  I continued to use it all the way through to October.  If you don't have one, and don't have the space for a glass green house I really recommend getting a plastic greenhouse! 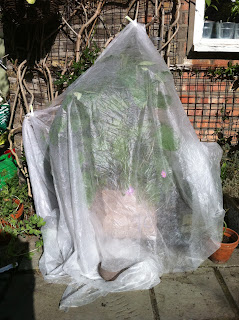 In the summer I also started to use horticultural fleece.  I've never used this before, not even in the winter but I bought some by mistake when I was buying some horticultural mesh for my cabbages.

For ages it remained stored in its wrapper and then when I started to see flowers on my aubergines I had little hope of them bearing fruit and I thought about the idea of using the horticultural fleece.  It worked a treat!

Definitely using it next year, especially if I get impatient with my tomatoes!

This year I stumbled across a really good variety of winter squash that seemed completely unperturbed by our disappointing summer.  They are called Zapallito de Toscana and I ordered them from the Garden Organic Heritage Seed Library Catalogue.  I am definitely going to be sourcing more seed for next year. 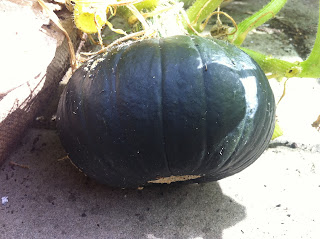 It was the first year I grew from seeds sourced from the Heritage Seed Library and I had some absolutely beautiful purple peas.


I wouldn't recommend them for crops to be grown in a container garden as they didn't really give enough of a yield but the flowers were beautiful and I just couldn't help take photos of them.

I would definitely recommend growing Heritage Seed Library varieties and to learn seed saving.  Its a great source of seed if you like to experiment with unusual or old heirloom varieties. 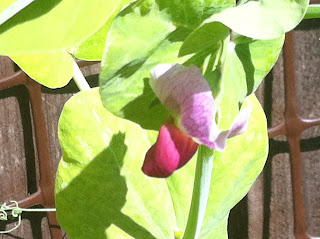 I tried seed saving for the first time this year and found it tremendously rewarding.

Next year, I am going to grow more varieties that are perennial/biennial and/or are low fuss to grow. Varieties I found to be in this camp this year were nasturtiums (plant them anywhere you have a spare bit of ground - you can make pesto, a little chopped leaves on top of curries, flavour for salads - they are truly wonderful and add colour to small plots), zapallito de toscana (winter squash), kai lan, chard, kale and herbs, salad potatoes...

In 2012 I will be looking for more varieties to add to this list.  I am still trialling Egyptian Walking Onions and broad beans. 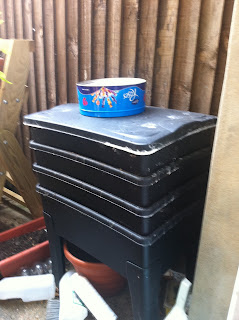 A review of gardening in 2011 wouldn't be complete without mentioning my wormery.  It provided me with wonderful worm casts and the garden benefited so much from the worm tea.  If I didn't have my own wormery I would pay for worm tea.  So much more superior than bought organic fertiliser.

Next year I plan to be far more savy in July and August with my winter planting.  Its lovely having things growing in the winter garden and I think you should be able to graze and browse your garden no matter what month of the year it is.  I still have some winter salad growing and brassicas in my garden.

I think it so important to keep a relationship with your garden no matter what season and that includes eating/grazing from it as many days of the year as possible!