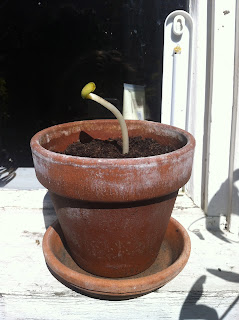 I think I am just going to have to accept it - I am a perennial squash grower.  Its a force that cannot be reckoned with.  Its a destiny that cannot be diverted... no matter what life throws in its way!

I am shortly to be moving house.  For this reason, this year I did not partake in the annual propogation of annual tenders like tomatoes, chillies and aubergines.  I put myself on pause for the simple reason that they would be difficult to move to another house especially a house move of such a distance as London to Birmingham.

So I denied myself one of my annual rituals.  I get so much pleasure patiently waiting until that day when the new seedling breaks through the soil and everyday after that grows and grows and grows.  I find it so exciting... it brings out the plant geek in me in a big way!

But this year I didn't do it.  I could read about you all doing it, Twitter was rife with it and I was deeply jealous at not partaking myself!

I thought I'd got over it.  Soon I would be able to do a late spot of propagation in April after our big move and all would be well... but alas, today when I was worrying over my wormery, redistributing food stuffs so all the trays will be a reasonable weight to transport in the move... I spotted what looked like a squash that's germinated all by itself....  I couldn't just leave it there to try and grow in the dark.  No doubt our recent heat helped things along for the little fellow.  So I planted him in a small pot.  Surely it will be OK to transport just one seedling?  It can travel on my knee to Birmingham.  Its only small!!!

I anticipate my boyfriend will say something along the lines of "Go on then" with that knowing look of the pains of having a plant geek of a girlfriend.

(Just between you and me I think he likes me cooking those home grown veggies for him though!)
Posted by Unknown at 14:40