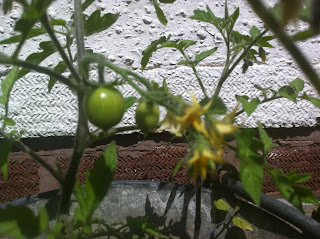 A few weeks ago I pulled up some tomatoes.  No, they weren't blight infested... They were just really small.  I didn't think they'd do anything in the current position and crops that don't crop just simply are not pulling their weight.


Bless them, it's not their fault we're having a cool, wet summer.  Its just not the right conditions for them to do their thing. 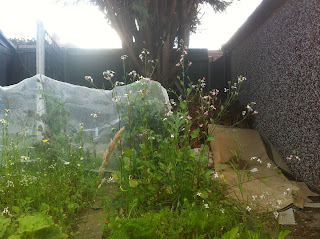 I wasn't completely ruthless.  I didn't have the heart to chuck them in to the wormery for future plant food - I transplanted them into pots which I placed on the patio near the house.  Its a sheltered spot and a suntrap (when we get it) and are looking a lot happier in their new home.  At present I have hope I may have about 5 tomatoes from my plants!

And what did I do with the new found space in my plot?  The space left was 50cm x 100cm rectangle and I've planted kohl rabi, several varieties of kale, rapini (a bit like kai lan) and some welsh onions.  The welsh onions haven't arrived yet but all the brassica seeds have germinated in lightening speed (a few days - I was just excited by their speediness!) 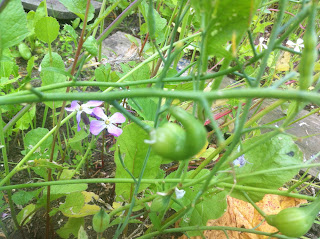 They are all still babies at the moment but I'm sure these babies will grow into plants pretty soon.  Especially if we get the week we're forecasted - another rainy one coming after our last week's heatwave.  And as I write the drizzle is starting.  Enjoy you little beauties.

On the rest of the plot the rat tail radish and kai lan are both doing well already - both brassicas of course so that will by why.  The kai lan hasn't really made it to the stove as it is so sweet and lush, it's been grazed on on the plot!

This is the first year I'm growing on a veg patch in about 5 years (it's a different mindset in a container garden) so I've started to think about what will be finishing when and what other winter crops I can sow in the new spaces.  Veg that is coming to mind is cavalo nero (this was a good friend through winter last year), garlic (any good varieties that grow the flowers you can recommend?), broadbeans, tree onions, maybe some mustards and winter salad... 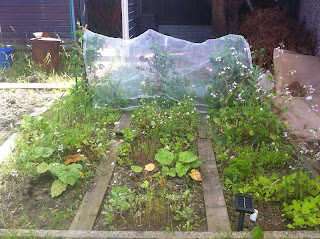 I've already been growing leeks through the summer.  I have a good feeling about the patch in winter and spring, possibly because I only started this patch in May (after deturfing in April) and I have a feeling the patch will be looking much more established by early autumn.  Hopefully the soil will start to improve also.  It's a loam soil but I think the grass that was growing on it when I arrived had depleted resources from the soil somewhat.  The beetroot, chard and carrots are small and not doing well and the radish were quick to bolt.  I've been regularly feeding with worm tea from the wormery as a feed but its not giving as much ooomph as it usually does and so my concern began.

Any soil tips?  Maybe some green manure over patches in the winter - but which ones?
Posted by Unknown at 12:07