As you may have already sussed I'm a bit of a cucurbit growing addict! 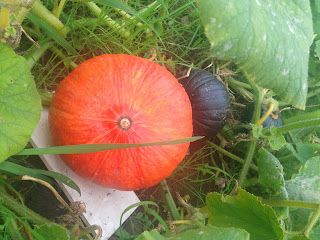 Last year, it was my first summer in Birmingham and I planted out my summer squash and winter squash to very disappointing results.  I didn't get one fruit off any - and my absolute favourite variety of pumpkin, which has fared well in previous typical british summers, almost grew a single reasonably sized fruit only to become slug fodder when its skin was still soft.  I was pretty devastated to say the least.  There were many heart sinking moments. 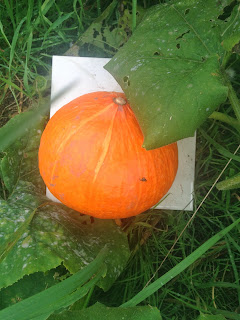 To be fair last summer was difficult for most of us growers with a few vacancies appearing on allotment waiting lists here in Birmingham as some people gave up. 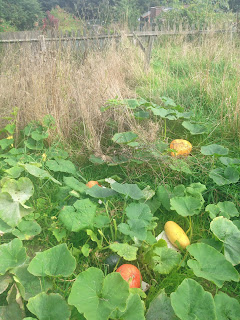 Not to be dragged down by recent cucurbit failures, I tried to learn from them and hit the web in search for varieties of winter squash and pumpkins suitable for our iffy summers.

From http://www.realseeds.co.uk/wintersquash.html I selected the Boston Winter Squash and Hokkaido.  They are both from the Hubbard variety of pumpkins / winter squashes.  Hokkaido has grown really well for me this summer - it was rampant and quickly dominated the pumpkin patch.  It's leaves are finally starting to shrivel now in early October, but its grown some beauties and I know we had a cracking summer, but I planted my pumpkins late (organising my wedding distracted me somewhat) and they were only planted in early July. 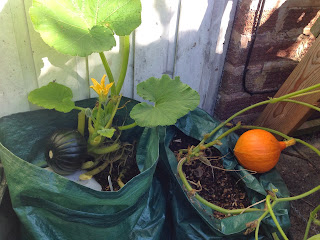 I planted 6 plants in my staff allotment plot next to the Urban Veg site http://urbanvegwhg.wordpress.com/.  This is a real sun trap so when its hot, its really hot here.  The soil is fertile and I added a scoop of home made compost underneath each plant.  They were a roaring success here with a reasonable amount of crop (about 2 fruit per plant and at least 1kg) (1 x hokkaido, 2 x Boston Winter Squash, 1 x Heritage Seed Library Georgian Candy Roaster and 1 x Zapallito de Toscana http://www.gardenorganic.org.uk/hsl/variety.php?IdNum=688.  I also planted some summer squash varieties on my patio in 5 litre sacks (a white patty pan, a summer crookneck (both from http://www.realseeds.co.uk/wintersquash.html) and Ram's Kodu (another HSL variety)) I am also growing a Hokkaido and a Zapallito de Toscana on the patio.  It is more practical to save seeds from my patio as on the staff allotment the bees from Urban Veg always get there before me. 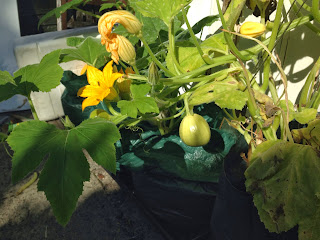 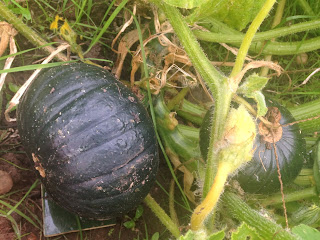 There is no point to grow two plants of the same variety on the allotment plot as they were so prolific there.  I will also continue to research varieties which should do well in our cool, short summers.  Often varieties of all veg types that grow in the mountains of Japan seem to do very well here and I will be on the lookout for more.  I will also keep saving seed as I may be able to breed a good variety of pumpkin that has naturalised to my two sites within 3 years.  I will definitely be experimenting with the Hubbards as I was so impressed with how well they grew this summer. 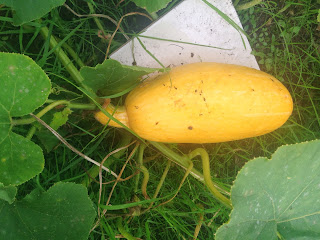 I have yet to harvest my fruit, with the allotment pumpkins all sitting proudly on a bathroom tile so the hard skins can dry nicely.  It may be a little early to say and maybe a footnote will be needed once I've harvested, wintered and cooked a few varieties. 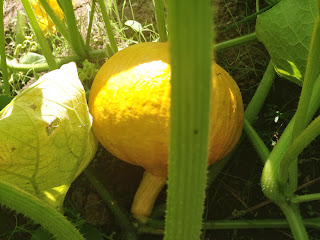 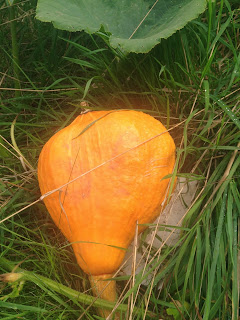