A Weekend in London meeting fellow Grow Your Owners

I recently went to visit fellow gardening friends in the big smoke that is London.  It's funny going back after living there up until 6 months ago.  Forgot how everything seems closer together - the streets are narrower and you are in much closer proximity to people on public transport than in more roomy Birmingham (or my version of living in Birmingham at least). 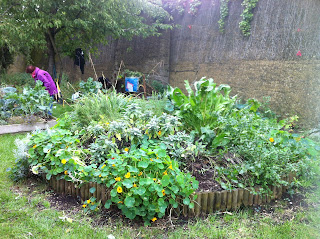 Despite London's crowdedness, there's lots of amazing urban gardening going on, brilliantly joined up by the wonderful http://projectdirt.com/  Come on you brummies with green projects - just start posting your projects and events on this brilliant website and we'll all be joined up in Birmingham too. 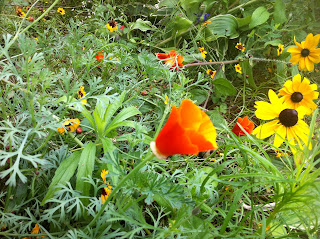 The Lambeth Poly "is a community initiative to grow skills, food resilience and social enterprise."  This is the first project and the vision is to have more polytunnels in the area supplying salad leaves and stir fry leaves to the local community, run by the local community.  The aim is to have more of these polytunnels in other areas of Lambeth.  This really looks like something that could be done in other cities/urban community areas around the UK - especially Birmingham. 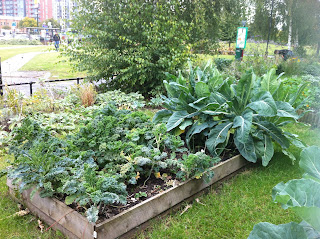 Whilst catching up with Fiona and sharing news, I gave her some seeds I'd saved from my garden that I thought may make a useful addition to the Lambeth Poly offerings.  Well one to trial at the very least - one of my favourites: Kai Lan.

Later on I caught up with Miranda, the powerhouse behind Transition Town Wandsworth's Bramford Community Garden.  We shared news and she updated me on how Bramford Garden is going.

I updated Miranda on the Lambeth Poly and she suggested the idea of a pop up greenhouse or a poly tunnel on wheels for vacant areas not being used - ingenious! 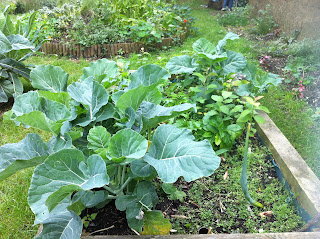 Some of you may remember that I used to blog about Bramford Garden from time to time as I mentored at the garden and got my hands dirty there every Sunday until I moved away to Birmingham.  Happy days and happy memories so I really wanted to go back and see how the garden's was going.

Of course there was lots going on in the garden.  The globe artichoke I planted well over a year ago flowered this summer.  I planted it when I didn't have a garden with sufficient room to grow one of these beauties.  The flower was so beautiful Bramford Gardeners didn't have the heart to harvest it!  Miranda was concerned that it was dying off but the only part that had dried up was the flower stalk.  Like a good perennial, it had divided and there were fresh green shoots at the base.  I was so pleased to see it - all those feeds of worm tea from my wormery had naturally paid off. 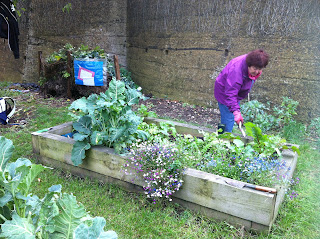 I was also really pleased to see the rhubarb.  I also planted this on site as my garden was too small.  They'd had a good harvest from the rhubarb about a month after my departure to Birmingham.  Another plant that really benefited from lots of worm tea feeding.

Actually my parting gift to the garden was a few bottles of worm tea!!

There were lots of cabbage growing and looking so healthy in the garden.  Naturally brassicas are doing great all over the country as they are particularly suited to our climate.  There were also really lovely flowers growing at all the edges and the compost had really come along. 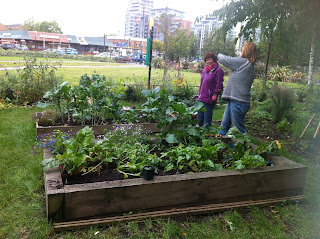 I'd brought some saved Kai Lan seeds for Bramford Garden too so I planted them in one of the beds.  They can take their leaves as cut and come again and if they forget to harvest the leaves, they'll get some lovely white flowers that can also be eaten or left to fully go to seed and allowed to self seed if they want some more new shoots.

They have a few new garden members, one of which is Mustafa who seems to really love gardening.  A recent convert I believe.

Naturally, at the end of the gardening session, any harvested veg was divided out between gardeners so I had some lovely potatoes which came back with me in my rucksack for my kitchen stocks. 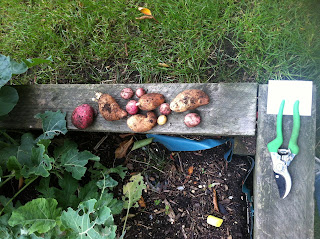 I really miss being involved with all of these gardening projects and going back reminded me how involved I was and how much food I used to get from gardening and mentoring local growers in Wandsworth.

I have recently been to see the Urban Veg garden at Winterbourne House and Gardens and have high hopes for involvement in that project.  It will be a project that I can bring all the lessons learned in London through working with school gardens and community gardens and build on that knowledge further.

And I am really looking forward to my future visits to London to share stories and experiences of growing in these two cities.
Posted by Unknown at 13:12