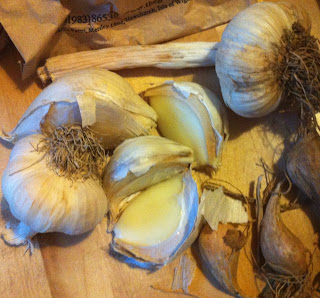 Its way way time to plant my garlic.  I usually aim to do this in October, but we had a holiday away in Singapore and with the nights drawing in its hard to find time in the garden.

However, we had it today.  There was pleasant sunshine, if a little cold but a fair autumnal day all the same.

So I set myself to the task of preparing the beds for garlic and shallots.  I decided upon the spot where the peas grew this summer.  Some of the pea plants had not quite given up the ghost, but it's time for the garlic all the same.  Its unlikely the few flowers I spotted would materialise into peas.

Interestingly this year, peas were the most surprising of my veg plot survivors.  I planted them in April, they took a long time to appear as the ground was not warm (I thought the birds were stealing them but I'm pretty sure now it was the ground temperature preventing them from germinating) and then from July through to late September they just kept producing peas.  Usually the heat of July kills them off but as we had such a cool summer, they survived through the summer into autumn.  But today it was time to turn the soil to its next occupant.

The old pea shoots were added to the wormery for my worms to chew their way through and turn into wonderful worm casts.  Then I started to weed the bed.  The soil that the peas had been inhabiting now looks incredibly rich and loamy.  The weeds were easy to pull as the ground is nice and moist.  As I was weeding away, it made me think how much we get to know our soil from weeding.  The aromas, the weeds that succeed there, it tells us so much.

And what weeds was I finding in the soil today?  Well as the veg patch was a grassed over patch of earth some 6 months ago, there was plenty of grass.  There were also a few docks and their long tap roots and buttercups.  There was also the aroma of mushrooms and interestingly a strong aroma of carrots being pulled.  I have never planted anything from the carrot family there so can only assume that there was a wild member of the carrot growing away happily until I chose to weed.

I was not surprised to smell mushrooms as my garden seems to be full of them at the moment.  As to what kind, I have no idea as yet but I am eager to find a local mushroom foraging course and as soon as I know more I will be able to share.

If you know of any Midlands based fungi foraging walks please do pass the details on to me.

As with usual gardening sessions in November, I started to lose the light and my fingers and toes started to get very cold so I only have 2 sections out of 3 prepared for my garlic and shallots but I am hoping for another fair afternoon tomorrow to get those bulbs planted in.
Posted by Unknown at 17:12