Gardening Guilts and signs of spring 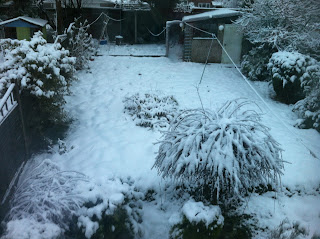 You may have noticed I've been a bit remiss with my blogs. Well I tend to write when I'm doing lots in the garden and I feel inspired... of late, it hasn't felt like there's been much to write about and that's because the snow's been stalling me.  Really?  I think that's just an excuse!  And gardening at the lovely Urban Veg just makes me feel more guilty about my absence from my own patch.  There we've been sowing broad beans and salads for the green house and its really starting to be populated with baby seedlings and lots of seed trays.

Meanwhile, at home my seed box has barely had a ruffle since I restocked it over Christmas.  I should be sewing those seeds that need an extra long season like the chillies and the aubergines (summer willing - pleeeease!).  All my seeds are organised in month order so its not as if its hard to do and over Christmas I bought my seed compost so there really is no excuse.  Hopefully committing my gardening guilts will spur me into action!

In terms of the garden, hey it might be winter still but there seems to be lots of signs of life starting up.  We may be getting lots of snow but that's not halting everything out there.  Over the Christmas period garlic started to peer through the soil and the HSL crimson broad beans germinated (I think something got a taste for one of them though) and despite the snow keeping the ground cold there are some lovely rhubarb shoots in such a vivid red and little lush leaves making a start.  The chives are starting to grow too.

So if the more hardy residents of the plot are braving their first shoots I really should get on with my window sill sowing in earnest and dust off the heated propagator for those chillies and long season tenders.  Its about time my windowsills are bursting with young seedlings!
Posted by Unknown at 12:43