We've had a lot of snow here in the Midlands.  Quite a few bouts.  It feels like Narnia - is spring really coming this time?  There's still a lot of snow on the ground in my garden. 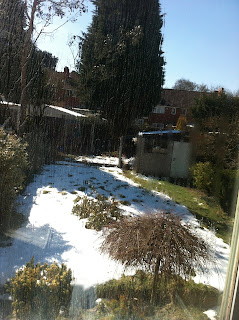 It's made me wonder if I'm doing the right thing with my windowsills full of seedlings for late spring plantings. (Chillies, tomatoes, aubergines and yacon) Should I be growing things that are less challenging?  After all we may have another summer like last year.  There's talk of the slip stream that caused last summer's rain and cool temps being responsible for all the reoccurring snow.  Must admit last summer and this winter have dampened my gardening spirits somewhat.

But snow doesn't just have to dampen our spirits completely, we can use it to our advantage.  As the snow is thawing in the back gardens some of my garden has thawed and other parts there's still snow on the ground.  I've been talking pictures of the garden as a record to show me where those cold spots are.  Its telling me a lot about the micro climates and if I understand them better it will help me garden and work with the micro climates in the garden.  It's really interesting because there's parts of the garden that get sunshine and these have still not thawed after a few sunny days.

To the left of the veg patch looks like the warmest part (lucky for my broad beans - yes they're still alive!).  The middle towards the front seems to be the coldest part and the rhubarb grows there. From the middle to the right still all has snow and the far right is warmer than the middle in the front where the rhubarb grows but it is only marginally warmer.  I have a globe artichoke growing in the far right side which has seriously been sulking in the snow.  I'm going to move it to a much warmer part of the garden where it will be happier and the thoughts are the back of the flower border where it will get plenty of sunshine and more shelter (this was one of the first areas to thaw). 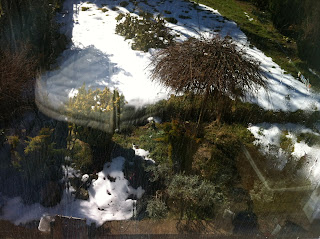 I already knew that my patio is quite a few degrees warmer than the rest of the garden and will be trying to grow my tenders plants there, its also a bit of a suntrap too.  I had also carried out studies to see where sun shines on the garden through out the year to learn where sun lovers should be planted.

A more scientific way to do this would be a soil thermometer but I've been looking and never quite seen a good one I want to invest in.  The snow does this job in a very visual way.

But despite my new knowledge I'd still like the Narnia winter to be fully over and spring to march into the garden!
Posted by Unknown at 10:39