This spring I decided to try growing salad potatoes for the first time.  I grew them in a potato sack, and as per the instructions I found on the internet, half filled the bag with compost, placed my chitted potatoes in the bag and liberally covered them with a chunk more compost.  As the shoots started to come through, as per the instructions, I kept covering them with more compost until I reached the top level of the bag. 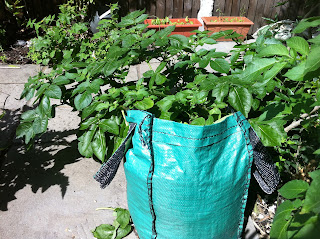 Potatoes are in the solanaceae family and as a general rule that family likes lots of sun, lots of water and lots of feed, so I basically treated them a bit like tomatoes but with out the removal of side shoots and no need for supports. 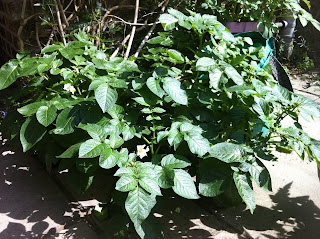 I waited until all the top shoots were flowering and then checked if any potatoes were there...

And it really paid off! 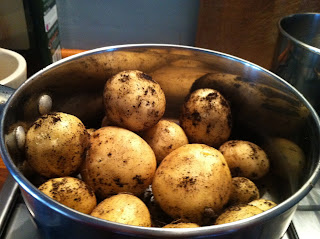 This is it....  I will be growing potatoes every spring from now on.  Even in a small container garden you get a really good crop.  I harvested 900g of salad potatoes from the potato growing sack in the picture above.  It really was like digging for treasure!

Salad potatoes are usually pretty pricey so this is a great crop to grow at home.  And don't they look perfect? 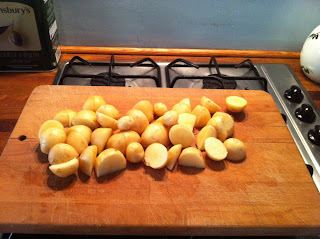 They were so crisp to cut.  I get an enormous pleasure chopping food I've grown myself.  Its a mixture of pride, having earnt the privelege through nurturing and watering and now getting the reward from all that hard work.  Lots of emotions!

What did I do with my new found bounty? you might ask...  I made the most wonderful potato salad.  The potatoes were so crisp to cut through, only needed a light brushing to remove the earth so I par-boiled them and promptly made some homemade mayonnaise to go with and a few chopped salad onions to garnish (also from the garden).  It really was very yummy!

Here's a link to my Potato Salad recipe
Posted by Unknown at 11:09