2011 saving money with a small garden 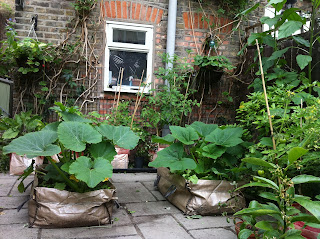 In 2011 I saved £172.45 through growing my own food.  With what I have learned over the last year I am sure I can increase that saving this year!

I only recorded savings between May to December as that was when I was initially inspired to find out how much I actually save with growing my own food. 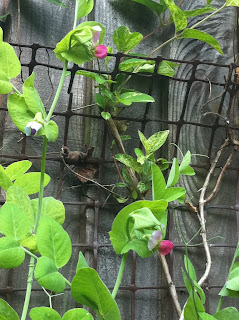 In 2010 I hadn't really learnt to grow many things to eat over the winter months as yet with chard being my main winter crop so until May this was really all that was growing outside together with the perennial herbs.

The saving for this month was £2.21 which consisted of salads, herbs, peas, turnips and some cabbage.

Things were starting to pick up a bit in June and I was able to more than double those savings to £5.34.  The spring sowings were planted out and starting to crop.

Crops I was eating in June were salads made with kai lan, chard, nasturtium leaves, pea shoots, mustard leaves, squash flowers, etc.  I was making herbal teas with mint and lemon verbena.  My crop of early potatoes were ready to eat and the potato bag produced nearly a kilo of salad potatoes - now that was a crop I savoured!  I was also eating french beans and peas. 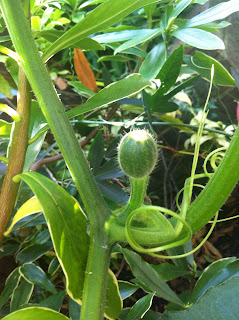 Savings continued to grow in July when I saved £7.90.  I had similar crops to June except for the potatoes - I was then waiting for my second batch of earlies which were being grown for my boyfriend's  rest & recouperation break from a tour in Cyprus in August.  There were also some new crops that came in to season: courgettes started to crop, patty pans and strawberries in hanging baskets.

The savings took a wapping jump to £72.51!  It includes gifts of 800g chard and 3kg of tomatoes saved from blighted crops which were given in return for volunteer gardening maintenance in a community garden.  As this was free food I included this in my savings.  In addition, it highlights one of the major benefits of joining or helping out in community gardens - free food! 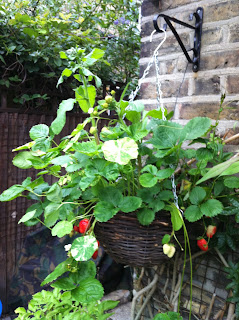 What was eaten in June and July continued to crop and with the addition of  chillies and sweet peppers, aubergines and tomatoes.  Interestingly these are all in the same crop family - Solanaceae.

The savings were pretty similar to August coming in at £62.53.  Again, a little generosity inflated my crops as a friend gave me 500g windfall apples which I turned into my first ever jelly - it was delicious and set marvelously.  All the crops in season in August were still producing in September just slightly less prolifically.  We had a really hot week at the end of September/early October - unfortunately I had already removed my tomatoes due to the blight experienced in August which would have done really well in that heat. 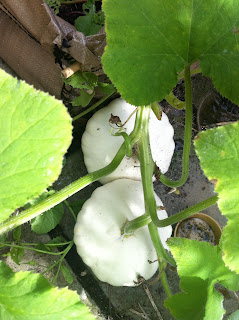 Things really started to tail off this month at £15.81.   Although, keeping that saving value high were the winter squashes.  The summer in 2011 was disappointing with not much sun but in mid to late autumn, temperatures were remaining stable at about 15 degrees centigrade which was ideal weather for the winter squash to fully finish on their vines before being cropped.  With the mild weather, tomatoes and chillies were continuing to finish cropping and winter salad was starting to be substantial enough to eat.

The year was really starting wind down now with £6.17.  Chillies and sweet peppers were still cropping and kale, cabbage, kai lan, nasturtium, chard and winter salad were this month's crops. 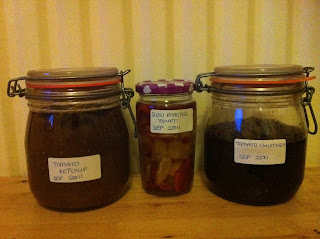 It has been a brilliant exercise recording all my crops and their weights.  Its given me something solid to reflect on.  Through the data I can see which months things were cropping in a challenging summer with little sun.  It also made me realise what foods were expensive and which ones were less expensive.  It told me that with a container garden it makes more sense to grow the high value crops that I can get a good yield from.

For 2012, I have decided to capitalise each season on getting the most value from my plot.  I will grow the expensive Solanceae through the summer and concentrate more on brassica types through the winter.  I will grow what grows easily in pots and not invest too much space in those crops that don't fare well in pots.  I found turnips were a disaster and peas were difficult.  However, I think I will still grow a pot of peas as they are like sweets in the garden!

From the summer, I will be planning my winter crops better - I was starting to do this in late summer 2011, but I will give this more focus in 2012 and sow some kohl rabi good and early.  I will experiment with a different variety of kale to see if I can find a favourite as this grows so well in winter and I find it easier to grow in containers than cabbage.

Lets see if I learn from 2011's data and really improve my savings and crop yields this year.  Watch this space!

Here's the Spreadsheet if you would like to see the results in more detail.

Have you done an exercise to record your crops?  I'd love to hear of your experiences.
Posted by Unknown at 11:59