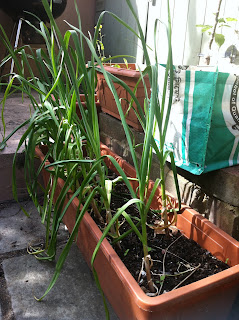 In urban areas, growing in containers and raised beds on rooves, terraces and patios is the method of choice.  Compost is really quite expensive and I don't like spending money needlessly or throwing away anything that can be recycled or have a second life.

I don't throw away spent compost but I do make a note of what has grown in the soil most recently.  For example, if I have grown something from the solanaceae (potato family) I ensure I do not grow anything from the family in the same soil when recycling it - in fact I will try and find a legume to grow in the soil next following the crop rotation rule of legumes following the potato family.

In the second hand soil, if growing something that's a hungry plant (e.g. pretty much anything except roots)  I add a generous portion of vermicompost, the beautiful black compost that my wormery makes and mix it in well with the secondhand soil.  If you are lucky enough to have the space for a traditional compost heap or a darlic composter this will be great too. 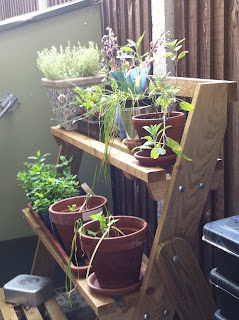 This saves me a lot in valuable compost - but using this approach you do have to be very mindful of  crop rotation and what's been growing in the soil before.

When growing perennials, I change the soil annually - especially for tree onions and kai lan which can be prone to disease.

I don't usually extend the use of compost past two growing seasons and usually just dispose of it in the borders where my landlord's shrubs live and I sometimes grow salads in the dappled shade under the small trees and shrubs and they grow really well in this third hand soil.

In theory I think you could just keep continuing to extend the use of growing in the soil by adding feed or vermicompost but it gets difficult to keep track of the compost after about two seasons which is why I stop using it in containers after that point.  I feel sure it can be done, but you would need a good system or to keep good records to keep track of which soil is where and its history.

Do you have any techniques or systems for using spent compost?  Would love to hear other approaches.
Posted by Unknown at 11:56