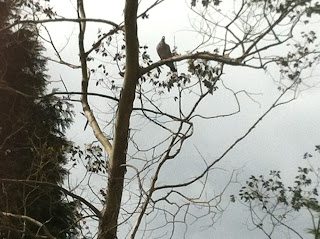 I have a bit of a dilemma with the birds in my garden.

I prepared my veg patch by deturfing it, turning the soil, raking the soil, feeding the soil and then I thought I was ready to plant the seeds.  I was a bit behind in sowing as I only moved house at the beginning of April - we were about mid April at this point due to the work I had to put in before reaching this point.  So I sowed my seeds and waited for them to pop out of the ground.  After a week I would look at the soil everyday waiting for signs of life but couldn't see anything.  I waited another week continuously checking the soil and then I saw it... the resident magpie was eating my pea seeds!  A day or two later the pigeons were completely grazing on the plot and had probably been grazing on my seeds the whole time when I hadn't been looking.  On inspection, I could see little holes all over the place, probably where they'd squeezed their beaks in to get at those no doubt delicious seeds. 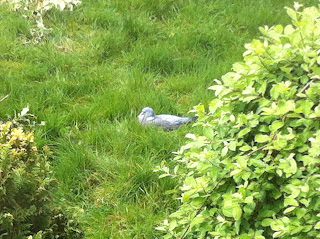 I have to admit, they were here first and they live in the tall trees surrounding the garden.  The birds in question are magpies and pigeons.  To be honest, if I was a bird and someone exposed the soil and started planting edible things into it, I would see it as a snack source too.  Its probably a lot easier to get at the seeds in the exposed soil of the veg patch than scratching around on the lawn.  Who can blame them?

So now I am game planning how to grow veg with birds around.  I am new to dealing with them as a pest and I don't want to think of them as a pest but would like to live in harmony with them and get to eat my veg all at the same time.  Someone else pinching my veg makes me very upset! 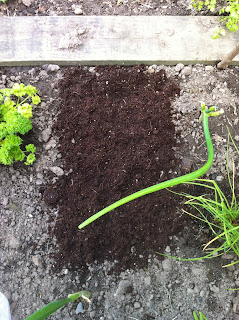 I am new to growing direct in garden soil.  Prior to seeing my grazing neighbours visiting the snack shop that is the veg patch, I was worrying over whether the soil was not soft enough and easy for the seedlings to poke through and make their home.

When my father came to visit he checked the soil (with a very cool PH/water probe) and confirmed that it has an excellent neutral PH (erring little on the acidic side but only very slightly) and it also has perfect water content - not too little, not too much.  I guess the garden being on a bit of a slope is helping with this drainage and the West Midlands rain is also making a good contribution!

The soil looks nice and loamy to me.  I didn't get as far as the jam jar and water test but it feels nice, smells nice, lots of big worms in the soil.  I've fed it a little with worm casts (which probably introduced a few tiger worms into the soil also).  But I still had this paranoia that the soil just isn't soft enough for new, delicate seedlings to establish, so I've put a thin top layer of peat free compost for them to germinate in.  Maybe this was just paranoia and the only reason I didn't see much germination was that they'd been snacked on - but there's not much time to get things going now so I want to throw every chance at these seedlings to establish!

I am sowing incorporating a little bit of inspiration of square metre gardening but on the scale of things in my plot. 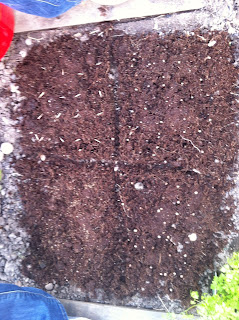 My plot is divided into 6 x 50cm wide rows and I'd already decided to split each row into 4 sections making 4 x 50cm2 sections per row making ideal sections for growing large crops like squash for example.

When sowing the smaller crops like roots, spring onions, radishes, salad, etc I've divided each section into 4 making 4 x 25cm2 in each of my sections.  So for example in a root section I should have a 25cm2 of carrots, 25cm2 of beetroots, 25cm2 of salsify and 25cm2 of parsnips.  I will be blogging on this in a month or two so watch this space for progress!


The Protection (from grazing birds)

I've been looking for methods online and spotted on the RHS website placing fleece over the seedlings while they establish.

I'll keep you posted if this works.  In the meantime I have placed an order with Organic Gardening Catalogue for some bird repellants which use sound, sight and feel to dissuade them away from the veg patch. 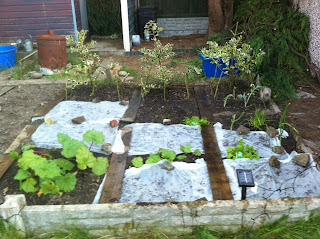 I also need to raid the CD collection for some that I will never think of listening to again!

I'm new to gardening with birds and I'm learning day by day - do you have any tried and tested methods that work for you?
Posted by Unknown at 11:32