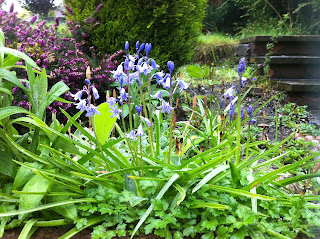 Half a month on from my last post about the new garden and the veg plot has been fully deturfed and the rhubarbs been slightly thinned out!  (It was a very scrummy rhubarb crumble)

We then had that really harsh wind storm and I thought the next door neighbour's eucalyptus tree was going to come down on our garden, it was being whipped around like it was a bendy twig. 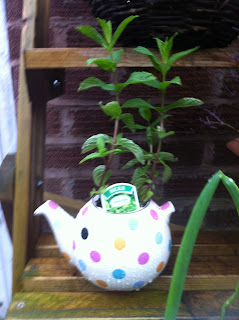 I was very relieved I hadn't planted anything into the veg patch by then or I would have been watching my poor veg being destroyed by the winds from the upstairs window or worst still traipsing through the wind and the rain with all manor of contraptions to try and save my poor veg.  This has happened before, sometimes during rain storms in the middle of the night and now I don't plant my beloved squash until after the 1st June for that very reason!

As quickly as the wind and rain came, within about 6 hours they abated and the following morning we had a really warm spring day with sunshine and temperatures in the plastic greenhouse reaching nearly 30 degrees.

This was most definitely a gardening day!!  I turned all the soil in the veg patch to loosen it up and get some air in and added all the worm casts my wormery to offer (and some bits that weren't strictly quite ready to use!) to add a bit of nutrition to the soil.  I dug this in to the upper layer of soil and then raked the whole bed. 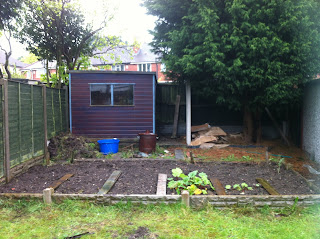 With time I won't dig the patch so much, using spent roots to rot into the ground and add their own nutrients and not digging were possible.  However, this patch of ground has been grassed over for what looks like a considerable amount of time, certainly a few years so my thoughts were to initially loosen the soil ready for the population of veggies that will soon find their home there. 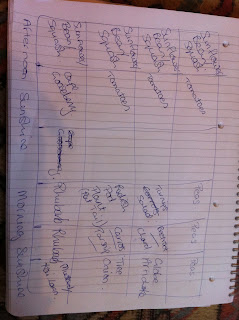 I then popped in for a cuppa and a sit on the sofa.  All that exercise had made me tired!  But I was still in gardening mode and on a roll so I didn't want to stop when I sat down for a rest.  I reached for a pad of paper and drew up a plan.

The plot is roughly 4m x 2m and can be neatly divided into 6 rows.  There are planks conveniently stacked against the fence at the end of the garden which I will use to make my paths.  Each of these rows I will divide into 4 squares (about 50cm square).  I got the inspiration for this plan from the square foot gardening idea.

Today its windy and rainy again but I'm itching to plant some peas, carrots and spring onions and get this plot started!!

Maybe the surface needs to be raked once more before I'm completely ready... Patience is a difficult thing when you're itching to have your own crops growing in your back garden!
Posted by Unknown at 16:22