Growing chillies in the bathroom

Its not the first place you think of to grow food so the bathroom may seem a little unusual as a food growing location.  Back in March, when I was trying to work out where to grow my chillies, I thought I would give it a go. 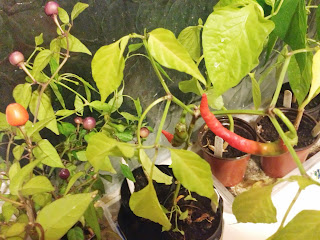 In years gone by I've grown chillies in the plastic greenhouse on our patio which works a treat.  Place chillies in plastic green house, water chillies and zip it up.  You'll come back the next day to see condensation throughout - but I've always found that the chillies enjoy the humidity and don't need watering too often to maintain it.  So that was my previous tried and tested method.  But this year the plastic had holes so I had to think of something else.

I needed a Plan B...  Next best thing I came up with was the windowsill in my bathroom.  The way the room is arranged is that the windowsill is smack bang next to the shower.  Usually we have two showers a day in my household and this hot and steamy environment has been working a treat for the chillies.  They've been cropping all the way to their ripe red selves from May onwards this year.  The first to ripen was an F1 cayenne pepper (I usually don't do F1 varieties preferring open pollinated varieties as you can save the seed from these - but these were free!), followed by pretty in purple (from Real Seeds), Bulgarian carrot and Numex chilli.  Pretty in purple have been the most prolific this year.

What we've really been pleased about with this method was how early in the season they started to crop.  Usually I haven't managed to get them to crop before August (not to their fully ripened colour).  What strikes me is that the bathroom being a typical run of the mill bathroom and not a purpose built chilli hot house has frosted glass.  It only lets in so much sunshine.  But they are cropping beautifully despite that.  I believe that they need heat and humidity more that sunshine but sunshine obviously helps.  If we've had a good sunny day, all the chillies use up all the water in their soil and are bone dry at the end of the day, if it's cloudy the soil in their pots remains moist.

And as the temperature in our bathroom is roughly between 20 - 25 degrees C I'm hoping that we will be getting chillies well into the autumn months - now that will make my new hubby Matt very happy indeed ... bring on the curry recipes!
Posted by Unknown at 12:36